Column widths are scaled such that the total width matches the desired chart width. To preserve the visual relationship between widths of different columns, there are no gaps between columns in a Mekko chart.

The Marimekko is great way of answering a variety of market overview questions. For example if we want to understand who the most valuable franchises are by sport the Mekko is a succinct way of showing it (see chart below). Each column in the Mekko represents a sport and each segment is a franchise. In this example no franchise can exist in two different columns/sports.  This however does not have to be true for Mekko charts in general. Often the segments in a Mekko are repeated across the columns.

I found a simple example in the Bain and Company 2012 Global Private Equity Report. They used a Marimekko chart that presented private equity investments in emerging markets. The main takeaway from the chart is that China, India and Brazil dominate the other emerging markets with respect to private equity investments. I decided to reproduce the data both as a 100% stacked bar and a Marimekko chart to highlight the added value of the the company. The two charts are on the slide below: 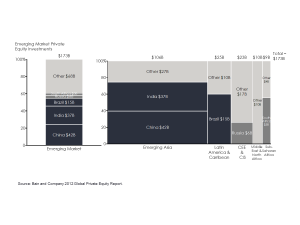 Both charts show that the China, India and Brazil dominate the other emerging market countries with respect to private equity investments. The 100% stacked bar on the left makes it easier to see that these three countries account for over 50% of the total investments. The Marimekko chart on the right adds regional data to the picture. You can see the relative importance of the three key countries and the relative importance of the four regions, with Emerging Asia accounting for over 60% of the total investment.