Managers and corporate leaders should learn from this picture of FIFA world cup 2018.
It is about how beautifully you keep your team motivated even after a Failure.

#KolindaGK attended every Croatia match at the World Cup, travelled in economy class and sat with the fans in the stadium. She refused to take any pay for her days not at work, put on a Croatian jersey despite of the dress code in the VIP area and was soaking in rain during the closing ceremony without even asking for an umbrella.

She went and congratulated France in the dressing room. With such inspirational leadership no doubt a war torn country like Croatia with just 4 million people (it is less than half of Any Metro city population) made such a huge splash in the World Cup the biggest stage of the most popular game on earth.

What do you interpret from this pic? 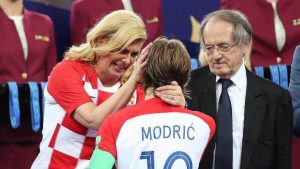